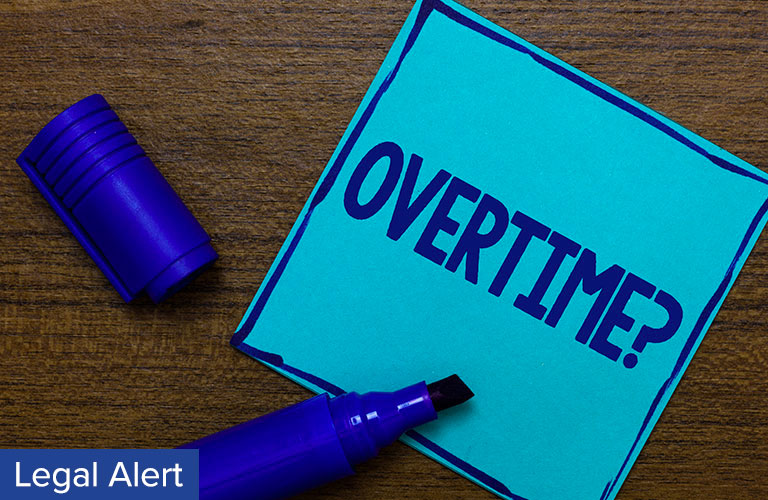 On September 24, 2019, the Department of Labor announced the final rule, to be published tomorrow in the Federal Register, changing the white collar employee exemption salary threshold to the overtime pay requirements of the Fair Labor Standards Act (FLSA). Under the previous regulation, executive, administrative, and professional employees (white collar workers) were considered exempt from overtime pay if the employee satisfies the duty requirements and were paid at least $455 per week ($23,660 annually). Under the new rule, employees who satisfy the duty requirements and are paid at least $684 per week ($35,568 annually), are considered exempt from overtime pay. Compared to the previous threshold salary of $23,660, the Department of Labor estimates that 1.3 million Americans will now be eligible for overtime pay. Put differently, if an employer currently has a salaried, exempt employee who is making more than $23,660 per year but less than $35,568 per year, unless that person’s salary is increased, he/she will become non-exempt. The rule will take effect on January 1, 2020.

Other changes made by the rule include an increase of the total annual compensation requirement for the highly compensated employee exemption from $100,000 to $147,414 per year. The new rule does not contain any changes in the overtime policies for police officers, firefighters, paramedics, nurses, laborers, or non-management employees in maintenance and construction-like occupations. There is some light at the end of the overtime tunnel, however, as the new regulation does not alter the existing duty tests for any of the white collar exceptions.

This is not the first time the Department of Labor has attempted to alter overtime exceptions: In 2016, the Obama Administration’s Department of Labor published a rule which attempted to raise the white collar employee exception to a salary threshold of $47,476 annually, or $913 per week. This rule was met with resistance, however, as twenty-one states filed an emergency motion for a preliminary injunction in the rule’s wake. As a result, a Texas District Court stayed the rule with a national injunction a week before it was set to take effect. Given the past legal hurdles rules of this kind face, employers should stay on the lookout for changes and updates to the new overtime regulation in the near future.

Employers are advised to immediately (1) review whether their salaried positions satisfy the duties and salary components of the FLSA exemption, (2) analyze the financial impact of reclassifying employees as nonexempt and the need to pay overtime, (3) review whether affected positions may require modification of assigned job tasks, (4) consider whether a fluctuating workweek agreement may be appropriate, and (5) consider the impact of reclassification on your organization’s finances, and the reactions of affected employees.

If you have any questions regarding the issues raised in this client alert, please contact your Labor and Employment Counsel at Smith, Gambrell & Russell, LLP.