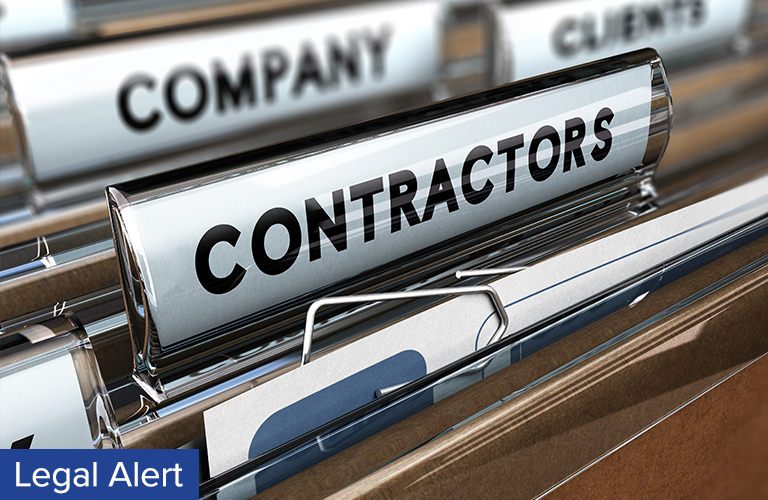 On April 30, 2018, the California Supreme Court issued its landmark decision in Dynamex Operations West, Inc. v. Superior Court of Los Angeles in which it considered whether a worker asserting California Wage Order claims was properly classified as an independent contractor rather than as an employee.

In the absence of any special arrangements between Dynamex and its customers, and provided that they completed their deliveries on the day of the assignment, Dynamex drivers were free to set their own schedules and were free to choose the sequence in which they made all their deliveries and the routes they would take.  When making deliveries, Dynamex drivers were generally expected to wear Dynamex shirts and badges that they purchased, and were required to provide their own vehicles and pay for all transportation expenses, including fuel, maintenance, vehicle liability insurance as well as taxes and workers’ compensation insurance.

Two Dynamex drivers sued Dynamex in a class action lawsuit for unlawfully misclassifying them and 1,800 other drivers as independent contractors in violation of Wage Order No. 9, which governs the transportation industry. In their motion for class certification, the two workers argued that they were employees and not independent contractors. The trial court ultimately certified the class action.

In its April 2018 decision, the Supreme Court upended the Borello test, which was a long-standing, nine-factor analysis used to determine whether a worker was an employee or an independent contractor. For wage and hour claims under the wage orders, the Supreme Court held that court should use the “ABC test” used in other jurisdictions to determine whether a worker is an employee. Unlike the Borello test, the ABC test presumes that a worker hired to perform services is an employee of the hiring business unless the business can prove all three of the following factors:

It is important to note that the ABC test is a conjunctive test. As such, the hiring business is required to establish all three prongs of the ABC test in order rebut the presumption that a worker is an employee. A hiring entity’s failure to prove any of these three prerequisites will be sufficient in and of itself to establish that a worker is an employee.

The second factor in particular makes it increasingly difficult for a hiring entity to classify a worker as an independent contractor. Interestingly, the Supreme Court gave a concrete example of an instance in which a hiring entity satisfies the second factor: a retail store hiring an outside plumber to fix a leak in a bathroom. The services of the plumber are not part of the store’s usual course of business. On the other hand, the Supreme Court stated that when a clothing manufacturer hires a work-at-home seamstress to make clothes from cloth and patterns supplied by the company, the seamstress is part of the clothing manufacturer’s usual business operation and therefore the worker’s role is more like that of an employee rather than an independent contractor.

The California State Assembly recently passed Assembly Bill 5 that would codify the Dynamex decision and would apply it to all provisions of the Labor Code and Unemployment Insurance Code, significantly extending Dynamex’s reach. A.B. 5, however, does contain exceptions for certain professions, including (1) those licensed by the Department of Insurance; (2) physicians and surgeons; (3) securities brokers and investment advisors; (4) direct sales salespersons; (5) real estate licensees; (6) hairstylists and barbers; and (7) those performing work under a contract for professional services (law, dentistry, architecture, engineering, accounting, marketing, and human resources. In those instances, the Borello standard would still apply. Negotiations continue as A.B. 5 presumably moves to the State Senate for consideration. One of the concerns about California Assembly Bill 5 is the conclusion that it makes Dynamex retroactive, meaning that it would apply to independent contractor relationships that existed before Dynamex was decided.

In light of these judicial and legislative developments, California companies are advised to reduce potential liability by auditing and reviewing their own classifications and updating all worker relationships under the Dynamex ABC test.